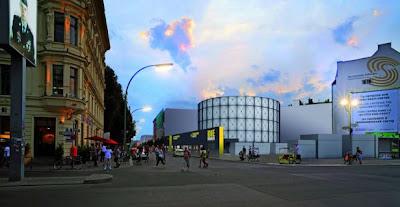 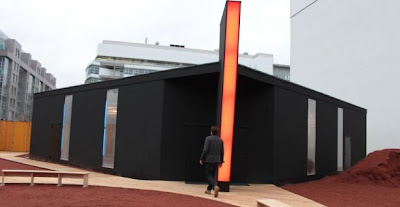 
Checkpoint Charlie was doubtless the most famous border crossing point in Berlin along the notorious Wall erected in 1961 to separate the eastern and western parts of the city. In the form of the Mauer-Panorama (Wall Panorama) by Yadegar Asisi and the BlackBox, two new institutions are opening in September dealing with the division of Germany.

The BlackBox on the history of the Cold War

On 21st September 2012 the BlackBox is opening at Checkpoint Charlie and in an exhibition space of more than 200 m² (2,160 ft²) will provide extensive information on the history of the Cold War. Using large-format photos and numerous media stations, it will not only explore the impact of the Wall on German history, but also make the overall international dimension of the division of Germany and Europe tangible. The external design of the division relates to the two Great Powers – the Soviet Union and the USA. The black colour of the external façade stands for the black box itself – the flight recorder capturing what happened for posterity. The red colour of the pillar stands for the Soviet Union and the blue window for the USA. It is planned to create a Cold War Museum on this site by 2015.

Daily life on both sides of the Wall

Starting on 22nd September 2012 Yadegar Asisi’s Wall Panorama will be on display. The 15 metre (50 ft) high cylindrical steel rotunda Wall Panorama will show life along the wall near the central Engelbecken (Angel’s Basin) between the districts of Kreuzberg (West Berlin) and that of Berlin-Mitte (East Berlin). This exhibition, which will be on display for at least 18 months, will show a panorama of daily life on both sides of the Berlin Wall on a fictitious autumn day in the 1980s. You will be able to see not only East German soldiers on border patrol but also graffiti artists, children playing and drunks at a curry wurst stand. Asisi is also integrating audio sequences and the voices of contemporary witnesses to complement the visual representation. In the 1980s, Asisi himself lived on the Western side in Kreuzberg and freely admits to his intention of bundling his own experiences into this project in order to relate a story for everybody to experience. The discussion will focus on the issue, to what extent people will generally submit to difficult political conditions in their daily life.
From 22nd September, the Wall Panorama will be open everyday from 10 am to 8 pm. Admittance will be ten Euros (with discount - 8.50 Euros). Parallel to this, Asisi’s Pergamon Panorama will still be running up to 14th October in the Pergamon Museum.